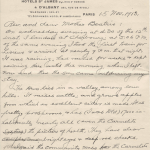 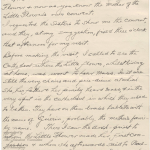 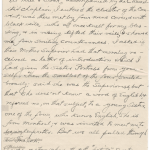 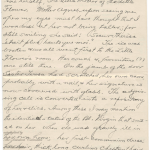 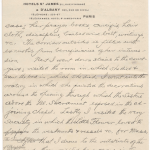 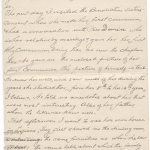 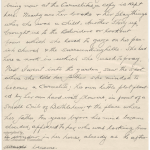 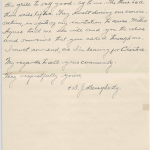 On Wednesday evening at 4.30 of the 12th inst. I landed at Cherbourg; at 5.06 P.M. of the same evening I took the first train for Lisieux and arrived at nearly 9 P.M. that night. It was raining, had rained for weeks and kept raining there until this morning, when I left. Now and then the sun came out during my stay.

The town lies in a valley, among low hills. It raises cattle; and grows apples from which an excellent cider is made. It is pretty, prosperous, and has (I was told) 17,000 inhabitants, nearly all (even the Carmelite Sisters) the picture of health. They have clear complexions, bright eyes and deep-red cheeks.

I said the community Mass for the Carmelite Sisters each of the three mornings that I was at Lisieux; the first to receive Holy Communion each time being, of course, Rev. Mother Agnes, “the Little Mother” in the world of the Little Flower, and now as you know the Mother of the Little Flower’s own convent.

I requested the Sisters to show me the convent, and they, at my suggestion, fixed three o’clock that afternoon for my visit.

Before making the visit, I called to see the Cathedral where the Little flower, whilst living at home, was wont to hear Mass. In it are still the very chairs and prie-dieux at which she, her father and her family heard Mass, and in the very spot in the cathedral in which they used to be then. They have on them brass tablets with the name of Guerin, probably the mother’s family name. There I saw the Arch-priest to whom the Little Flower made her first confession and whom she afterwards said to Pauline that she should have told that “she loved him with her whole heart,” because he represented God. I send you a picture of this Church.

At three o’clock, accompanied by the Carmelites’ chaplain, I entered the cloister of the convent; was there met by four nuns covered with black veils, who at once knelt for my blessing, and in rising lifted their veils, and showed me four smiling countenances. I asked if their Mother Superior had that morning received a letter of introduction which I had given the Sister Portress from yourself. Then the smallest of the four, smiled broadly; said she was the Superioress, but that she does’nt know a word of English, and referred me, on that subject, to a young Sister, one of the four, who knows English. She is from Montreal; and was invited to meet me, to be interpreter. But we all pulled through in French.

I was astonished that the “petite” Sister, who smiled so blandly and looked like a good little business woman, was Pauline herself, The Little Mother of The Little Flower. Mother Agnes upon seeing me open my eyes must have thought that I wondered at her not being taller; for still smiling she said: “Soeur Therese etait plus haute que moi.” The ice was broken and we all went first to the Little Flower’s room. Her couch and furniture (?) are still there. On the jamb of the door Sister Teresa had scratched her own name, probably with a nail, and her signature is now covered with glass. The adjoining cell is converted into a repository of her relics. Among these I may mention the identical statue of the Bl. Virgin that smiled on her when she was gravely ill in her own home; her first-communion dress; her hair, thick, long, curling chestnut hair hanging down in a mass, inside a glass case; her prayer books, crucifix, hair cloth, discipline, barbed wire belt, writings, &c. The corridor outside is filled with ex-votos from beneficiaries of her intercession.

Next I went down stairs to the courtyard; visited the room in which she died and saw the bed in which she died. I went into the oratory in which she painted the decorations around the opening through which the Sisters adore the Bl. Sacrament exposed in the adjoining chapel. Lastly I visited the very sacristy in which the Little Flower loved to prepare the vestments and vessels &c. for Mass.

After that I drove to the outskirts of the city and there visited her grave in the town graveyard, in which she lies buried with her Sisters. Not far away in the same graveyard lies buried her father, and, I think, her mother.

The next day I visited the Benedictine Sisters’ Convent where she made her first communion, and had a conversation with Pere Domin who is her relative by marriage, and gave her her first Holy Communion, being then as now the chaplain there. He gave me the enclosed picture of her first Communion. The picture of himself is true. He knew her well, and saw much of her during the years she studied there, from her 8th to her 12th year, I believe. He told us anecdotes about her that were most interesting. Also of her father, whom he likewise knew well.

That afternoon I went to see her own house in Lisieux. They first showed me the dining room, containing the same furniture as when she saw it last: the round table about which the family sat when she was leaving them; her foot-stool &c. I went up stairs to her own room; saw where the Bl. Virgin smiled upon her when she was so ill; the original statue being now at the Carmelites, a copy is kept here. Nearby are her books and her playthings when she was a child. Another story up, brought us to the Belvidere or look out from which she loved to gaze on her parish church and the surrounding hills. She had here a nook in which she used to pray.

Next I went into the garden, saw the spot where she told her father she minded to become a Carmelite; her own little plot planted by her own hand with flowers, in front of a small Crib of Bethlehem; and the place where her father, ten years before his mind became clouded, appeared to her, who was looking from a window in her house, already as he afterwards became.

The last morning of my stay, after my mass at the Carmelite Convent, her three sisters came to the grill to say good-by to me. The three had their veils lifted. They knelt during our conversation, in spite of my invitation to arise. Mother Agnes told me she will send you the relics and souvenirs that you asked through me.

I must now end, as I’m leaving for Chartres.

My regards to all your community.